The 32nd Bomb Squadron was activated in 1917 at the 32nd Bomb Squadron (L). It remained on active duty during the interwar period and after WWII.. The flight echelon of the 32nd Bomb Squadron (H) departed March Field, California for the Philippines theater around December 1, 1941. The ground echelon left San Francisco on December 5, 1941 but returned immediately after the Japanese attack on Pearl Harbor. The flight echelon arrived in the Philippines with B-17Ds. Most of the planes were destroyed early in the Japanese campaign, and only a few members of the personnel (estimated at four) of the squadron survived the superior forces of the enemy. In this connection it is interesting to note that Captain Colin Kelley was assigned to the squadron and was a member of it until his transfer to the Hawaiian Islands in November 1941. Another famous member of the 32nd was Sgt Harry M. Hayes, who from the wrecks of a number of planes managed to assemble two planes capable of being flown. One was destroyed, but the other flew, overloaded with evacuees, from the Philippines to Australia. Sgt. Hayes had never flown before and his exploit was widely circulated by the Associated Press.

The 32nd Bomb Squadron was awarded the Presidential Unit Citation for outstanding performance of duty in action against the enemy in the Philippines and Netherland Indies for January 1 to March 1942 per WDGO 70, 1942.

The 32nd BS ground echelon was sent to Bakersfield, California on March 1, 1942, then to Geiger Field at Spokane and assigned to the 301st Bomb Group. A new flight echelon was assigned. Major John T. Cox was the commander. He relieved Major Eubank who was sent to Australia. (later a General).

They flew their first combat mission to Meulte, France on October 2, 1942. The following 32nd aircraft and crews flew this mission: 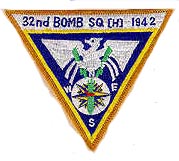