Left Hawaii in Nov 1942 and, operating from bases in the South and Southwest Pacific with B-17 and B-24 aircraft, served in combat with Thirteenth AF during the Allied drive from the Solomons to the Philippines. Flew long patrol and photographic missions over the Solomon Islands and the Coral Sea, attacked Japanese shipping off Guadalcanal, and raided airfields in the northern Solomons until Aug 1943. Then struck enemy bases and installations on Bougainville, New Britain, and New Ireland. Raided the heavily defended Japanese base on Woleai during Apr and May 1944 and received a DUC for the action. Helped to neutralize enemy bases on Yap and in the Truk and Palau Islands, Jun-Aug 1944, preparatory to the invasion of Peleliu and Leyte. Flew missions to the Netherlands Indies, receiving a DUC for an attack, conducted through heavy flak and fighter defenses, on oil installations at Balikpapan, Borneo, on 30 Sep 1944. Completed a variety of missions from Oct 1944 until the end of the war, these operations including raids on enemy bases and installations on Luzon, Ceram, Halmahera, and Formosa; support for ground forces in the Philippines and Borneo; and patrols off the China coast. Remained in the theater as part of Far East Air Forces after the war, but all personnel evidently had been withdrawn by early in 1946. Redesignated 5th Bombardment Group (Very Heavy) in Apr 1946, and 5th Reconnaissance Group in Feb 1947. Remanned in Mar 1947, equipped with FB-17's and F-2's, and engaged in mapping areas of the Philippines, Formosa, and the Pescadores.

Insigne. Shield: Party per pale nebuly vert and sable a death's head argent winged or. Crest: On a wreath of the colors (argent and vert), a bull's head caboshed azure and armed or. Motto: Kiai O Ka Lewa - Guardians of the Upper Regions. (Approved 21 Jun 1924.) 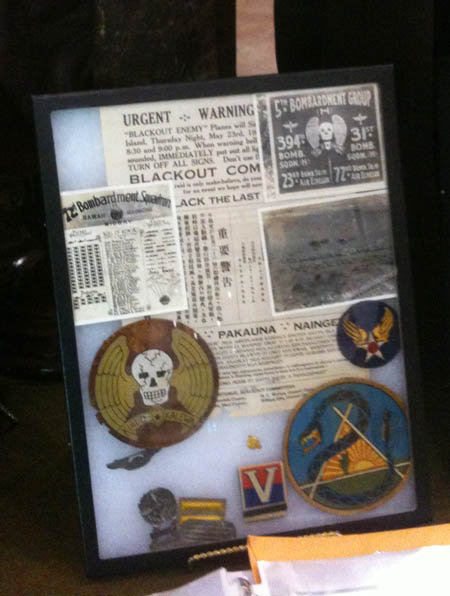