Above, a piece of V-mail written on VE-Day, to a GI's mother back home.

Letters home have been a part of every war. Before email and satellite phones, GIs kept in touch with folks back home through letters and "V-mail" or "Victory Mail" - a special form for letter-writing which was microfilmed, reducing it to the size of a thumbnail. Vmail was then shipped home and enlarged when it arrived in the states. The idea of V-mail was to make more room in mailbags and to expedite delivery. Prior to V-mail, a letter might take 45 days or more to reach home from the front by ship.

V-mail began in England as "airgraphs" and was adopted by the US in June 1942. V-mail was used regularly until late 1945. More than 1.5 billion V-mail letters were sent and received during that three-year time period. By miniaturizing V-mail, the US Post Office reduced 2,575 pounds of regular mail to a single sack weighing 45 pounds. One 16-mm roll of the microfilmed V-mail letters weighed in at 7 ounces and could hold more than 1,500 letters. 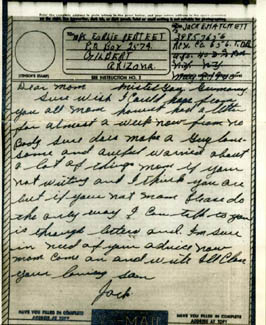 Following is the text of a letter from a Sgt. Alexander Micholowski, 906th Ordnance H.A.M.Co, dated 22 Dec 44 to a Miss Terry Citowski of Maywood, IL. Any spelling or other errors are copied from the original.

Before I go on please excuse pencil but I just ran out of ink & I'm in a position where I can't get any until tomorrow morning. I am now sitting at a desk that more than likely belongs to some Limey official. I am C.Q. at Hqts tonite.

I have answered your letters as I get them although it sure takes a long time getting here takes almost a month.

Say I am still waiting for those pictures you took at the Dells in the different type play suits. You remember the picture you sent me holding a piece of something or other in your hands, well I had to go spoil it. I made a trinket of it & will send it to you as soon as possible.

The weather here is really bad. I believe everyone in the company has a cold. Its been raining every day & it gets cold as the devil at the shops but in order to feel any heat you more or less have to sit on it.

Haven't been doing much of anything out of the ordinary went to a wedding week ago & have another to go to the 6th of January. These guys getting hitched in England are driving me batty I can't figger out the angles myself why should anyone marry a girl especially a Limey when after we get back he can more or less have his choice. All the girls want from a Yank out here is a free try to the states & a good time while he's in England. What the trouble is I believe they've seen too many movies all that flash & glitter of Hollywood, they think every American is just filthy rich & doesn't do a lick of work.

Terry honey I've received your package & your Moms thanks a million. Tell your Mom thanks the cookies were really swell.

Terry thinking back of the times we used to have brings back memories of a trip back home after a visit until about 3.A.M. I almost ran the Buick into the Des Plains river that morning. I was 3 quarters asleep until then, sure kept awake after that.

Received a letter from my Cousin Ray the other day, boy he sure has it hell out there somewhere in New Guinea.

Well darling ran out of things to write about so will close for now until later.