Few aircraft are as recognizable to the general populace as the famous P-40 Warhawk, emblazoned with the tiger shark teeth of the American Volunteer Group, or ?Flying Tigers.? It is a symbol of an era in aviation.

The P-40 was the last of the ?Hawk? line of pursuit (fighter) aircraft produced by the Glenn Curtiss Corporation. The original Hawk of the 1920s was made famous the world over by the amazing feats performed by Army Lieutenant Jimmy Doolittle and his contemporaries. The P-36 Hawk debuted in the mid 1930s, and was a fantastic pursuit plane for its day. It was a metal monoplane, with decent armament, powered by a radial engine. Aircraft were growing up fast in the late 1930s, however, and the P-36 quickly became obsolescent. The U.S. Army Air Corps issued a call for designs for a new fighter to replace the P-36 and Curtiss answered with an updated design, still very similar to its previous model. After the installation of a new liquid-cooled Allison inline engine, the P-40 underwent its flight testing and was approved by the Army. Unfortunately, even with the improvements made over the P-36, when compared to its contemporaries, the new Warhawk was decidedly inferior in almost every aspect of performance, except for its ability to dive very steeply and its overall ruggedness.

The P-40 is most famous for its association with General Claire Chennault?s American Volunteer Group, the ?Flying Tigers.? This group of American pilots and mechanics flew in China against the Japanese for months, before finally being absorbed by the 14th Army Air Force in 1942. They fought long odds and lost very few men and planes, accounting for over 200 of the enemy. The flair for painting the tiger shark teeth on the nose of their Warhawks was their trademark.

P-40s were the standard pursuit aircraft used by the Army Air Corps at the time of Pearl Harbor, and were the first U.S. planes to shoot down enemy aircraft in the Second World War. The attack by Lieutenants Richard Taylor and George Welch, flying P-40s, on a formation of Aichi D3A ?Val? dive-bombers over Oahu on December 7, 1941 has been well documented in print, in art, and in the film Tora, Tora, Tora. It was P-40s that were sitting on the ground like lambs waiting for the slaughter at Clark Field, Luzon, Philippine Islands, when the Japanese struck. The survivors flew out of Cabcaben Airfield on Bataan Peninsula for the rest of that ill-fated campaign, battle-damage repaired with pieces of bamboo and rope!

After the debacle in the Philippines, American pilots in P-40s continued the struggle against the Japanese, first in the Dutch East Indies, then over New Guinea. As American units were transitioned into what has been termed the ?Second-Generation? Fighters, such as the P-38, P-47, and P-51, the venerable old P-40s were given to Australian and New Zealand squadrons, who served in them admirably through the end of the war.

In Europe, the P-40 was used by the British as well as the U.S. squadrons, and saw much action in North Africa. Being an excellent low-altitude fighter (the lack of a turbo-supercharger made performance at high-altitudes poor), as the second-generation fighters appeared over African skies, the P-40 soldiered on as a strafing and light interdiction aircraft. The famed ?Tuskegee Airmen? of the 99th Pursuit Squadron first saw combat flying P-40s. By the end of the war, P-40s had been employed by the United States, Great Britain, Australia, New Zealand, China, the Soviet Union, the Netherlands East Indies Air Force, France, Canada, and several other nations. Obsolete from the outbreak of war, the P-40 and her valiant pilots wrote themselves into history.

Today, there are less than a dozen P-40s still in the air. Those that are still around make the annual tours of airshows, reminding the onlookers of the days when air combat was between two scared men; a duel fought with guns. A duel fought close enough that shark teeth painted on the nose might spook the enemy. 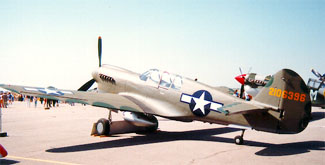