The populus knew war was coming, they just did not know when and when it did it was a complete surprise. The next day the President of the United States, Franklin D. Roosevelt, would call it "A date which will live in infamy". It all began on Sunday morning December 7, 1941.

The place was Pearl Harbor on the island of Oahu in the Territory of Hawaii. The home base for the US Navy Pacific Fleet contains Ford Island in the center of the harbor on which numerous docks were located including Battleship Row. This expansive military complex also includes Hickam Field that housed elements of the US Army Air Forces bombardment and pursuit groups.

At 7:48 AM, the Japanese surprise air attack began, launched from a floatilla of six aircraft carriers protected by nine destroyers, two battleships, two heavy cruisers, one light cruiser, nine destroyers, submarines and other supporting vessels. Aboard the carriers were over 400 aircraft. The force was led by Admiral Chuichi Nagumo under the overall command of Marshal Admiral Isoroku Yamamoto the commander in chief of the Japanese Combined Fleet. While the target and objective of the attack are attributed to Yamamoto, the responsibility for the planning and tactical implementation fell to Captain Minoru Genda. 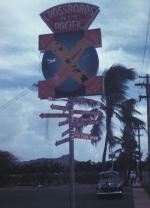 The reasons for the Japanese aggression were numerous; crippling the US Navy while they could finish their Pacific conquests and consolidate their positions would appear to most to be at the top of the list. Hawaii's position as the crossroads of the pacific pushed the US nearest bases back to the west coast making the line of supply even longer for supporting any actions in the south Pacific. The missions' objective therefore was to damage as many ships as possible with the US aircraft carriers being the grand prize. Until 1941 a countries naval power was measured by its battleships that fired heavy shells over 20 miles. However, as evidenced by the German blitzkrieg of Poland in 1939 Europe using tanks and aircraft, military doctrine was shifting to a strategy of mobility. In the Pacific with the navy required as troop transport, it became logical that the employment of aircraft and thus aircraft carriers would evolve as the striking force before regular army landings. The attack on Pearl would be the culmination of strategy developed over a number of years by the Japanese as the majority of the terrain of their war theater was ocean. While most of their Axis-ally Germany fought on contiguous land mass, Japan fought on both land and sea; but the tactics of mobility had replaced trench warfare and battleship engagements as the new method of conquest.

The Japanese attack on began. At 6:00 a.m., with 183 aircraft taking off from their carriers led by Commander Mitsuo Fuchida. This included three groups and objectives. In group 1, referred to as Kate Bombers were 50 Nakajima B5N bombers armed with armor piercing bombs targeting the battleships and aircraft carriers. Then 40 more B5Ns armed with torpedoes (Type 91) specially designed for the shallow waters of the Harbor. Group 2 encompassed 54 Aichi D3A, Val, dive bombers with GP bombs targeting the facilities on Ford Island and Wheeler Army Air Field which is adjacent to Schofield Barracks on a plateau in the center of the island of Oahu. Wheeler was home to a number of pursuit squadron aircraft including the 15th Pursuit Group, assigned to the Hawaiian Air Force Command. Group 3 was comprised of 45 Mitsubishi A6M, Zeke, fighters that were tasked with air cover and target strafing at Ford Island's facilities and Naval Air Station, the Army Air Forces' Hickam and Wheeler Fields, Barber's Point and Kaneohe. Hickam was home to the Army Air Forces at Pearl and Barber's Point and Kaneohe were Naval Air Stations situated on the northeast coast and southwest coast of the island respectively.

As the first wave of Japanese attackers approached Oahu from the North, a new radar installation on Opana Point on the northern tip of the island detected inbound aircraft. However, they mistakenly identified them as a flight of B-17s inbound that morning from California. The B-17s were on their way to Clark Field in the Philippines and were stopping in Hawaii to refuel. They would be caught in the air without ammunition, some would divert to other air fields such as Bellows, some would attempt to land at Hickam. Some would crash on landing because of lack of fuel others would take fire from Jap fighters.

Led by Lieutenant Commander Shigekazu Shimazaki the second wave consisting of three groups totaling 171 planes took off for Hawaii. In group one 54 B5Ns with general purpose bombs (GP) went after the aircraft and hangars at Kaneohe, Ford Island, Barbers Point and Hickam. Group two, 81 D3As to the harbor targeting aircraft carriers and cruisers. Group three contained 36 Zekes (A6Ms) that were to fly cover for group one and strafe targets of opportunity.

Unfortunately for the Japanese and conversely for the US, her aircraft carriers were not at at their home base on December 7. The USS Enterprise and USS Lexington and USS Saratoga were out to the west of islands at this time. The carriers lack of presence on this day may have been a strong determining factor in Nagumo's cancelling the third wave attack.

The 5th Bombardment Group, stationed at Hickam Field lost a number of B-17s and B-18s in the attack. Men from their photo group captured many shots of the damage and are in the collection of the Army Air Corps Library and Museum. View a Army Air Forces Pearl Harbor survivor's photo album. The Japanese did not obtain Yamamoto's ultimate goal, the carriers' destruction, but nevertheless a large amount of damage was done by the attack. In the battle that lasted approximately 90 minutes, the US lost four battleships, sunk in the harbor (USS Arizona, USS Oklahoma, USS California, USS West Virginia), 3 more were damaged (USS Maryland, USS Pennsylvania, USS Tennessee) and one was grounded (USS Nevada). An assortment of cruisers, destroyers and other ships were sunk or damaged. On the aviation side of the ledger, there were over 400 planes on Hawaii spread among all the airfields. 188 were destroyed 155 of which were on the ground and nearly 160 damaged including the B-17's that were arriving from California that morning. Personnel losses were 2335 soldiers killed, 1143 wounded. Civilian losses were 68 killed and 35 wounded. Besides the stated damages there were numerous other items that were destroyed: vehicles, buildings, hangars, barracks, equipment, runways and other essential items.

At the time the attack on Pearl Harbor galvanized a nation that sacrificed and worked with one goal, victory and the unconditional surrender of Japan and Germany. The Japanese may have missed out on the carriers on December 7, but the industrial might of the US would hardly notice the losses of the ship and aircraft of that day as the next few years their production would replace those losses many times over. It would take nearly four years but final victory would belong to America and her Allies.