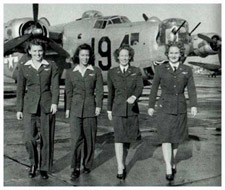 Although the WASPs, Women Airforce Service Pilots, were not an actual branch of the military, but civilian contractors, they still had to wear uniforms. AAF Regulation 40-9, dated February 14, 1944, states that the WASP dress uniform will consist of: Jacket, Skirt, White shirt, Black tie, Beret, Shoes (either plain black pumps or black oxfords), Hose, and Gloves. Uniforms were made of Santiago Blue wool and included the dress beret. A black shoulder purse and a gray overcoat complete the outfit. On the dress uniform, WASP wore the Army Air Corps HQ patch on the left shoulder. WASP silver wings were worn on the chest, along with the wing and prop insignia and gold "W.A.S.P." insignia on the lapels. Optional command disks could be worn on the shoulder epaulets. A small version of the gold Army Officer's cap badge was worn on the beret.

Aside from the dress uniform, the WASP had several other outfits to choose from. Upon graduation and assignment, and prior to the issue of the Santiago Blue uniforms, each flyer bought men's khaki shirts and trousers for summer wear, and Army "pinks and greens" for winter. There was a blue flight suit with a matching blue poplin ballcap, and an Ike-style "battle jacket" with matching slacks, also in the Santiago Blue color. Blue and white shirts were issued for wearing under the various uniforms. During training and graudation, WASP could wear the "General's Whites" - consisting of khaki or "pinks" pants with a white blouse and a plain unpiped men's khaki garrison cap. During training, WASP generally wore men's green HBT (herringbone twill) coveralls, jokingly referred to as "zoot suits" because of their tendency to be much too large for the female pilots. White turbans, nicknamed "Urban's Turbans" after the base commander at the time, were also worn by the WASP during training, although most of the WASP disliked them and therefore didn't wear them.

Early WASP wings were privately purchased by Jackie Cochran and given as a gift to the early graduating classes. The face of the shield was smooth and the number of the graduating class was engraved on it. Above the shield, a scroll carried the number of the flying training detachment, the 318th. Official WASP wings were designed and made available by December 1943. In their center was a diamond, the traditional heraldic woman's shield. 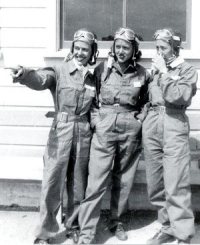