WWII On The Homefront 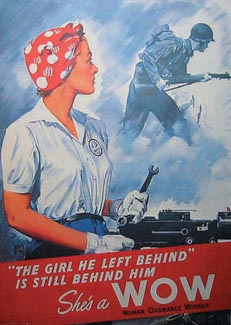 While many men were fighting and dying on the warfront, activity on the homefront increased drastically. Factories were retooled for the war effort and increasing production. Weapons were produced by such companies as Singer Sewing Machine, Rock-Ola (jukebox manufacturers), and even International Business Machines (IBM). Many women left their homes and took jobs on assembly lines, producing everything from bombs to aircraft and earning themselves the nickname, "Rosie the Riveter."

Materials needed for the war effort were given overseas priority, and so rationing of many items went in to effect. This included sugar, meat, coffee, liquor, silk stockings, tires, gasoline, and many other products. Each civilian received ration books that contained stamps that allowed a fixed amount of certain rationed items to be dispensed. Citizens planted "Victory Gardens" in their backyards and took up canning and preserving to conserve materials and avoid waste. Cookbooks and magazines put out special "Victory Editions" with recipes specially geared toward conserving and making the most of un-rationed items (sugarless chocolate cake, meatless meatloaf, etc.)

Many Americans signed up for volunteer duties with Civil Defense or the American Red Cross. Still others organized rubber and scrap metal drives, or war bond rallies and dances. The eagerness of Americans to participate in blackout and air raid drills; to recycle metals, rubber, and even cooking grease; to work longer hours, and to submit to rationing of essential household items demonstrated the nation's strong solidarity and support for the war.